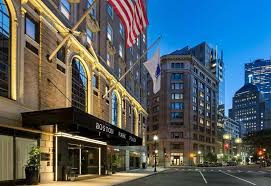 ALA's block is full and it is past our cut-off date. If you need a reservation you may call the Boston Park Plaza central reservations office at 617-457-2290. Our rate is no longer available and the hotel is quite busy over our dates, so rates are very high. For additional options you may try other hotel reservation sites such as Hotels.com or Travelocity.com, and indicate you need a hotel in the Boston Common area.

The Boston Park Plaza Hotel offers Valet Parking for $58 per night. Valet Parking is located at the Columbus Avenue Entrance of our Boston Hotel.

The Motor Mart Garage is located directly across the street from The Boston Park Plaza Hotel. It offers 24-hour access, visible security and a clean friendly environment. Current rates are as follows:

GO Boston Shuttle's scheduled hotel shuttle service is the best way to get between your hotel and Logan Airport. With a limit of no more than three stops, it's convenient, fast and affordable. For those crunched for time, upgrade for a few dollars more to "Private No Preference" or book a black car to ride in style, comfort and luxury. Private service is available 24 hours a day, 7 days a week.

Make your reservation here: choose Discounts on the navigation bar and then Hotel Shuttle Discounts. Select Park Plaza Hotel – Boston from the drop-down box and enter your information.

Uber and Lyft offer transportation to and from the Boston Logan International Airport.

Taxi service from Logan is approximately $25–$30 plus gratuity, each way.

For travel between September 14–23, 2019, American Airlines offers discounts for group travel. When making your reservation online at aa.com, please enter 5499BK as the Promotion code and 822850 as the Business Extra code. You may also contact the Meeting Services Desk at 1-800-433-1790, although please note that a service charge may apply.

Receive up to 10% off your airfare at delta.com if you travel between September 12–25, 2019. On the Search Flights page, select Book Your Flight, click on Advanced Search and enter code NY2KX in the box. Reservations may also be made by calling Delta Meeting Reservations at 1-800-328-1111 Monday–Friday between 7 a.m. and 7:30 p.m. Central. (Please note there is not a service fee for reservations booked and ticketed via the reservation 800 number.)

We have partnered with United Airlines to offer travel discounts to our event. Visit united.com/meetingtravel and enter ZH56301678 in the Offer Code box. You may also call United Meeting Reservation Desk at 800-426-1122 Monday–Friday, 8 a.m.–10 p.m. ET and Saturday–Sunday, 8 a.m.–6 p.m. ET. Booking fees are waived for meeting reservations. Please note that travel must be booked between September 14–23, 2019, in order to receive the discount.

Ride the rails to Boston.

Both Amtrak and Boston's Commuter Rail service make it easy to get in and out of the city.

Traveling at speeds up to 150 miles per hour, each Acela is fully equipped with power outlets and audio entertainment in-seat, bistro cars, elegant first-class cars, wide seats, conference and meeting areas and other amenities.

Explore Boston, where the new and the old are in constant conversation, where cobbled-stone streets meet glass-enclosed shopping galleries, where The Freedom Trail landmarks stand beside cutting edge restaurants and renowned performance theatres brush shoulders with trendy nightclubs.

Uncover Boston's past while enjoying its distinctively modern edge, enjoy the old masters, and the brew masters, pedal-powered swan boat rides or high-speed catamaran whale watches. Shop artisanal markets or chic boutiques. While the afternoon away at a sidewalk café or dine from the popular food trucks found throughout the city. Stroll the lively waterfront or cruise the historic harbor.

There's so much to do!

You'll have time to explore Boston for lunch on Thursday, and dinner each evening. Check out these dining options near the hotel or for personalized service, feel free to contact the Boston Park Plaza concierge. Just call 617-426-2000 and ask for the concierge desk. They'll be happy to make a recommendation and a reservation!