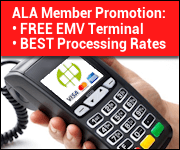 CHICAGO, ILLINOIS — The Association of Legal Administrators’ (ALA’s) is pleased to announce that the ALA Board of Directors has approved bylaws for the Mexico Chapter of ALA. The establishment of the Mexico Chapter represents the first new ALA chapter since the late 1990s, with the principal office located in Ciudad de Mexico (Mexico City).

One of the Association of Legal Administrators’ (ALA’s) strategic goals over the past three years has been to expand the international presence of the organization and increase the level of support it provides to those international members.

“The members have plans to develop mentoring programs for those beginning their careers in legal firms,” says Mexico Chapter member Marlon Mendez of Holland & Knight. They also plan to “foster succession planning, workshops, and networking opportunities as a way to promote leadership in the member firms and the Mexican legal community.”

ALA welcomes the opportunity to be present in Mexico and looks forward to exploring legal management in Latin America as well as other regions and continents. Through the work of its International Relations Committee, ALA recognizes the importance of collaboration and idea-sharing between members in U.S. territory and international members to strengthen the legal profession as it moves toward universal knowledge.

“In the last 10 years, the legal industry has grown significantly in Mexico. Because of this, the administrative positions within the legal firms have developed and specialized in all areas,” says Mexico Chapter President Joaquin Marin, Holland & Knight Mexico SC. “The Mexican ALA chapter is an example of this. We are sure that there will be a greater educational and professional development in the Mexican legal market.”

The new chapter will be led by:


As globalization of professional legal management has increased, the Mexico Chapter will provide members with the opportunity to share their wealth of knowledge with their colleagues.

“ALA knows that legal management is important to the future of law firms, corporations and government organizations worldwide,” says Paul Farnsworth, Chair, ALA’s International Relations Committee. “Through outreach efforts to groups such as this one, the International Relations Committee is working to promote the growth of knowledge and expertise in the business of law.”